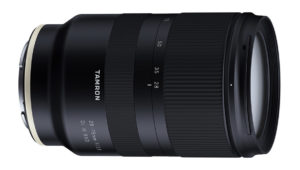 Some photographers who used Tamron’s new 28-75mm f/2.8 for E- mount has reported autofocus issues with the lens, and later the company admits the same issue through official acknowledgement. Tamron says they are in process of debugging the issue and finding the concrete solution. The company says it will issue a firmware update soon, and based on Sony’s E-mount standard, it will be able to apply firmware directly through the camera itself.

Various users reported specifically autofocus locked or fail, but according to Tamron statement, they wrote that it occurs while shooting video, but photographers reported this issue is with still shooting. We have seen some image samples on various websites and noticed a very brief amount of front focusing problem, but then found that there is no accuracy problem with the focusing system of the lens.

Thank you for your interest in Tamron products.

We would like to announce that we discovered some issues with the auto focus of our new lens, 28-75mm F/2.8 Di III RXD (Model A036) for Sony E-mount, 35mm full-frame mirrorless cameras, released on May 24, 2018. The issues occur primarily when using the camera in video recording mode.

Rest assured, we are evaluating the cause of the error and for the solution to this matter. We expect this issue to be resolved very shortly and we will release a firmware update at that time.

We sincerely apologize to all users and potential purchasers for any inconvenience this issue may cause.